The temperature persisted at six degrees above average for more than twenty-four hours.  Dry heat on the western side of the Great Divide in summer is never a surprise.  Mugginess is.  I yearned for the cackling heralds - the kookaburras – to signal rain.  None came.

The morning’s powder-puffed blue sky surrendered by mid-afternoon to a blanket of steamy grey sludge.  Mugginess doubled down.  The atmosphere dragged my senses back and forth to a former life in the Byron Shire.  There, huge flocks of yellow-tailed black cockatoos would barnstorm our home in flight from the destructive hinterland storms, as if we needed warning!  Their alarming squawks never failed to deafen, and random low formations to enthral.

Returning to last December, on the western side of the Divide.  Near neighbours Sal and Tony arrived for drinks just as our native garden erupted into a cacophony.  Sulphur-crested cockatoos, aided and abetted by cousins the galahs, squawked and belched an array of syncopated screeches.  I wondered how we four would ever hear one another! 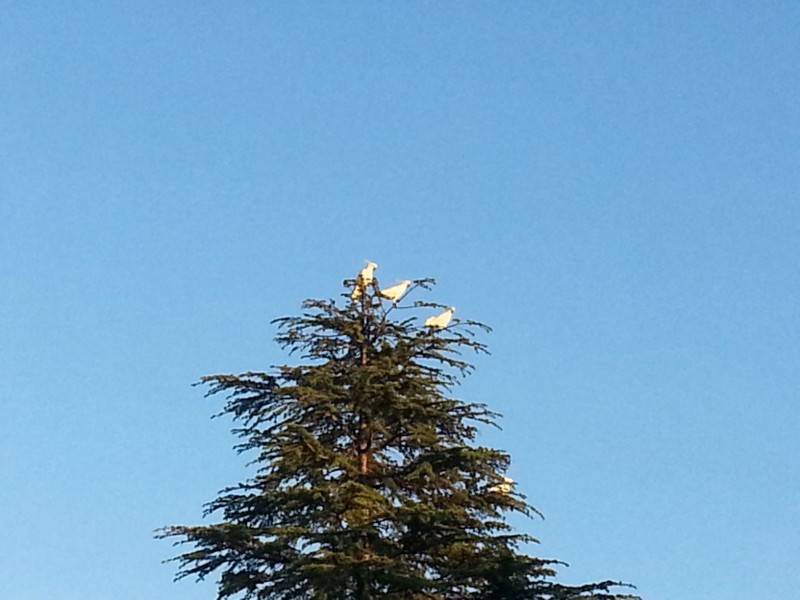 A tier of sulphur-crested cockatoos kept watch over Ross Hill

The screeching choristers stopped – instantly - as our guests entered through the foyer.  Like naughty children feigning innocence, the galahs returned to foraging in the native garden and the cockatoos to upending the very dish that feeds them.

Always generous and buoyant company, Sal and Tony offered gifts wrapped with delightful simplicity in ribbon-fragments from Sal’s triumphant label, flaex, an homage to sustainable design.  One gift was a copy of Annabelle Hickson’s ‘hot off the press’ GALAH.  I couldn’t have missed the irony of the timing and antics in the garden, but news was moving apace, leaving my musings for the cutting-room floor.

It was in Sal’s and Tony’s beautiful garden in 2019 that Annabelle’s book, A tree in the house was launched to our community.  It is not only luscious, but also emblematic of what can happen when a ‘creative’ takes the biggest hurdle from dreaming boldly to producing that dream.

‘I hope you love this book’, wrote Annabelle in my mother’s copy.  How fitting and what’s not to love!  It reminds me of the beauty my mother used to create in anything from a single stem vase to a baby’s bath.  She would wander across her paddocks and along the creek’s edge, or bush roads, to return with sheaths of ‘dead stuff’.  An hour later, vessels and ‘dead stuff’ would appear throughout her home in anything from subtle to dramatic vignettes.

Placed discreetly in acknowledgements of Annabelle’s book is a tribute to her mother for instilling ‘from the very beginning, that creating beauty is a thing worth doing.’  What a supreme philosophy to espouse. 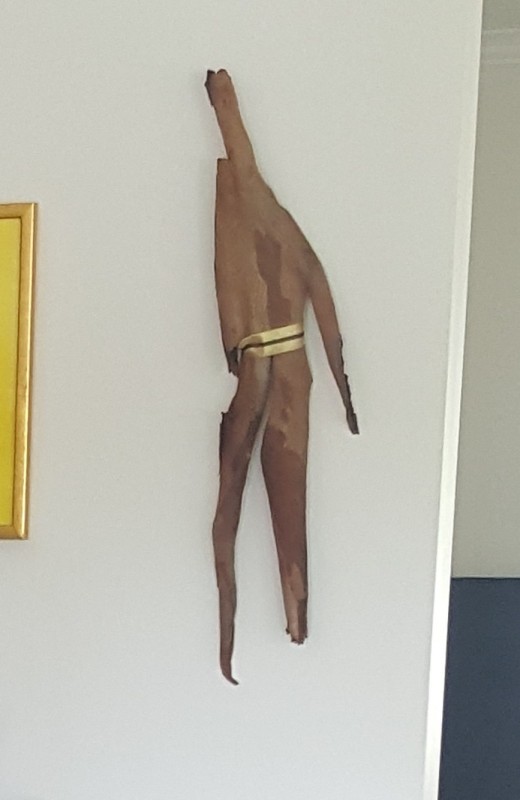 Though my mother has moved on from her paddocks and roadside harvests, she still forages and creates in small doses.  She accepts, sometimes under sufferance, my propensity to drag in large slabs of bark to hang on the wall.  She doesn’t always see the same beauty as I, but concurs they last longer than roses.  So, up they go!

Fortunately, the perception of beauty is subjective.  Imagine how narrow and more divided the world would be if it were not!  In the show-bag of perception one person might swoon, another does not notice, and another deride viciously a creator’s work.  Isn’t it the act of creating something - anything with mind and care – that makes it beautiful?

Surely a creation’s function, regardless of form, is to lift our minds and spirits out of the dark and murky.  Don’t we owe it to ourselves, to others and life itself to look, actively, for even a scintilla of beauty in almost every moment?  Oh yes, there are exceptions, tragically, but they don’t belong here.

After having lifted our spirits during that December evening, Sal and Tony said goodnight just as the mugginess ceded to rain.  I smile still to see them heading off, grinning like defiant children in bare-footed satisfaction, imagining them stamping in puddles gleefully at their front gate.  If something makes us smile, in the moment or memory, isn’t it beautiful?  That was.

Later that evening, GALAH disappeared into my mother’s room.  A day later, she appeared with deliberate delivery and insisted, ‘You must, must read Of weet-bix & wilde by Emily Harris’ (pp 142-43).  I complied because my mother has a knack for intuiting when a piece appears as if echoing my life in some way.

While the specifics of my life are different from Emily’s, I stand charged and guilty of permitting the scale of my own distractions.  I need a wide clean slate before I can settle into ‘real’ work.  Once the slate is clean, I’m too fatigued to begin!  Such a profligate and counter-productive MO.

However, story concepts bubble like a hot spring six or more times a day, whereupon I force them into the Great Artesian Basin of my mind.  No, it is not prideful conceit!  I am overwhelmed by this rampant thing intent on taunting me.  ‘Not now.  Not now!’ I bark back at it while going ten rounds with distractions.

So it is that I want to acknowledge ‘bush birds’, like Sal and Annabelle et al, not just for their courage and the beauty they create, but for the songs of contentment they score while harnessing discipline and self-generating energy.  They remind us that creativity is the essential ingredient at the core of our being.

Be damned!  Professions, trades, and most occupations are the by-products of creativity, not the other way round!  As we need energy to create, I must ask what energy we create from creating, and what happens to that excess energy left behind?

When an accidental inventor I knew tells his story, he cringes thinking of his first product.  He admits it was rudimentary and he was naïve.  However, his energy and creativity seeded a phenomenally successful brand that still assists millions of other to create.  I call this the slipstreams of creativity.

My mind is drawn back to birds, the species that flock in V formations.  Each lead bird pulls back, eventually, for another to lead.  They cycle from leader to led to restore energy, achieved by ‘gliding’ on the slipstreams of lift generated by the lead bird’s wingtip vortices.  I’m no scientist of any discipline, obvious here to scientists’ bootlaces, but it cannot stop my leaping brain from imagining we humans, though not birds, might be discarding an enormity of renewable creative energy.

Do we create little worlds of energy just from our emotions?  Is there a spike when we are ‘inspired’, ‘awed’ or ‘amazed’ by another’s creativity?  What drives us there?  Acknowledgement? Naturally!  Goodwill and encouragement?  Yes, yes!  Purchases?  Absolutely.  Yet, I wonder whether such words - de jour - are not short-changing the act of creation, unless we take the next step to create!

When I look at the creations of others, I don’t look with a critical eye, or ascribe my ‘like’ or ‘dislike’.  I’m curious about the complexities inherent in their creation.  Without needing to know anything about their personal lives, I can still imagine and admire their abilities to dismiss distractions and to harness energy, to be the people I call the can create, is creating, have created people.

When I wrote the first draft of this piece on NYE – the one lost for not ensuring the sticky mouse hit submit - I’d written for an hour or more, surrounded by more environmental chaos than I would endure normally.  I’d blocked it out: a first!

I accept now that my office is a work in progress.  Just into the third week in February, office chaos still surrounds me, though it is diminishing, but I am writing!  I do not expect my first creations to be perfect or crowning achievements.  Please!  For one reason, where would I go from there if they were?  There is no destination for an accomplished writer, but endless flight paths.  I accept, more please.

Sal’s bowed ‘ribbons’ hang now from blinds on the French-doors beside my desk.  I put them there to bring smiles, contentedly.  It feels like beauty on the inside.  They remind me that others find the slipstreams towards contented creative processes, even when faced with crippling adversity.  I’ve no excuses.  Annabelle’s GALAH draws me in, piece by piece, to savour.  Read look at and feel it, you will understand why.

I wonder if real bush birds sense beauty on the inside when they herald their messages.  I wonder if they analyse to the nth degree the quality of their heralds, and if they laud or conversely ostracise one another, based on preposterous scales of approval.  Musing of course.  I am grateful for the birds of the bush - winged mechanical and human - for the insights, beauty, and energy they generate.

I am writing and this is my endless flight path, sometimes solo and sometimes slipstreaming. 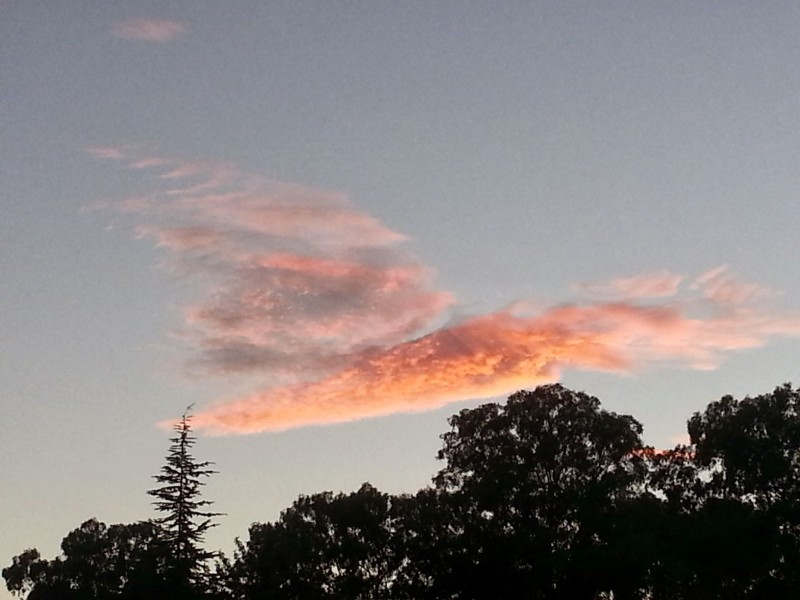 Galah-cloud over Ross Hill in 2014 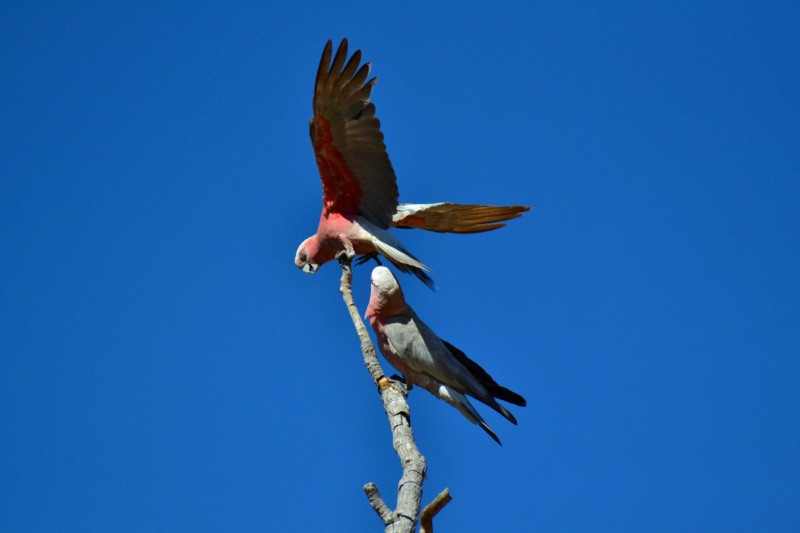